The “white-coat effect” is not reserved for only the human patients who see their blood pressure rise in response to the stress of a doctor visit.

In a new study, researchers have determined that anxiety associated with being in a veterinary hospital elevates the blood pressure in retired racing greyhounds – a breed known for having higher-than-average blood pressure in the first place.

The environment seemed to make all the difference. Blood pressure readings recorded in a home were similar when taken by either a veterinary student or the dog’s owner. In general, normal blood pressure in dogs, as in humans, is 120 over 80.

Some animals’ blood pressure readings normalize after they’ve had time to acclimate to the hospital setting, but in these greyhounds, that trend is less common. According to the researchers, this study suggests that the presence of the dog owner might have a more calming effect than the passage of time in the clinic.

“We see a lot of greyhounds and they are very high-strung dogs,” said Guillermo Couto, professor of veterinary clinical sciences at Ohio State University and senior author of the study. “Some greyhounds come in here with blood pressure above what an instrument can read – that is 300 systolic. We know this could not really be their blood pressure because these dogs would be dead. But we also almost never get blood pressure under 150 or 160 for systolic. 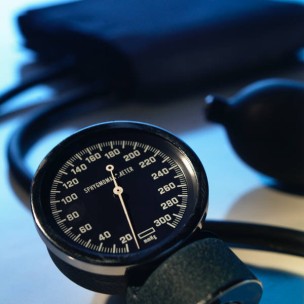 “In the study, their blood pressure was nearly normal at home, independently of whether the researcher or the owner checked the pressure. To my knowledge, nobody has documented that white-coat effect in dogs with hard data before.”

Most of the estimated 200,000 pet greyhounds in the United States are former racers that have been adopted at the end of their careers. Couto and colleagues recommend that retired racing greyhounds’ blood pressure be recorded in the home if possible to provide a more accurate measure.

The study is published in the current issue of the Journal of Veterinary Internal Medicine.

The scientists performed the study with 22 retired racing greyhounds that are enrolled in a blood donor program at Ohio State’s Veterinary Medical Center. The average age of the dogs was 7 ?? years. Twelve were male and 10 were female.

In-home blood pressure readings were taken between seven and 28 days after the hospital measurements to avoid any effects of the dogs’ blood donations during their hospital stays. The owners then followed the student’s in-home reading 24 hours later.

The student used a specialized machine and instructed each owner on how to use it, providing reading material and offering a demonstration. The machine costs about $1,500, but Couto said manufacturers are currently working on developing a less expensive and more user-friendly device that could be used by dog owners in a home setting.

The systolic and mean arterial pressures, as well as heart rate readings, taken in the hospital were significantly higher than all of those same measures taken in the home environment. The average hind-limb systolic pressure was 165, compared to at-home measures of 131 and 133 when taken by the researcher and the owner, respectively.

“This study emphasizes the need to consider the environment in which the blood pressure is measured before diagnosing or eliminating hypertension,” Couto said.

Unlike the blood pressure readings, heart-rate levels, while still higher than in the home, were lower in the clinic among “veteran” greyhounds that had frequently visited the hospital before the study. According to the researchers, this finding suggested that acclimation to the clinical environment did affect this particular stress response.

The researchers also found that the limb used to measure blood pressure affected the results. Measures were taken in both forelimbs and hind limbs. Measures tended to be higher in the back legs, but the reasons for this were not determined by the study.

Couto and his colleagues are now exploring whether retired racing greyhounds’ hypertension resulting from this white-coat effect causes any damage to their kidneys or other organs.

Couto, an oncologist, is leading a number of studies on these animals to gauge the effects of racing on their health, as well as likely genetic contributions to their high risk for bone cancer. Since he adopted his first retired racing greyhound 20 years ago, he has been committed to investigating their physiologic idiosyncrasies.

“They’re hypertensive and yet they don’t have target organ lesions that people with hypertension get. They have strokes, unlike most dogs, but the strokes they have are different from strokes in hypertensive humans. Their kidneys and eyes don’t take a beating from the high blood pressure,” he said. “So my thinking is that greyhounds are ‘Type-A personality’ dogs. They are raised in a racing environment, but they are pack animals, so this stresses them out. And then once they retire, they are couch potatoes. We’re trying to put all of this together, and it’s all aimed at promoting wellness in these dogs.”

We comply with the HONcode standard for trustworthy health information:
verify here.